Traffic tickets in New York almost always carry points. These points are assigned a number based upon the alleged seriousness or gravity of the traffic ticket offense. Too many points and your New York State driver’s license will be suspended. Too many speeding convictions will result in an revocation! Too many serious traffic violations and alcohol related convictions and you could lose your driving privilege permanently! NYS DMV now has a twenty-five year look back on SDO or Serious Driving Offense(s) and alcohol related offense(s).That is one reason why it is so imported 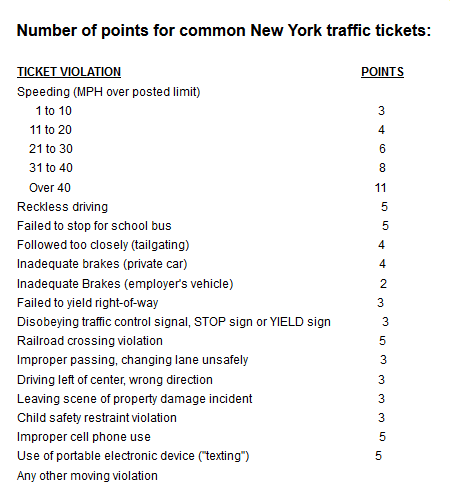 to fight each and every ticket issued against you or your loved one! Even the least serious consequence of a suspension may create many long-lasting obstacles for employment or quality of life.

Our lawyers have represented motorists in virtually every bad situation involving their license or privilege (meaning; unlicensed driver or out of state drivers passing through New York) and managed to successfully keep them driving.

With so much at stake, why not let the professionals handle it for you! We don’t only bring 26 years or prosecuting and defending to the table, we will appear in court for you – so you don’t miss a day or a half-day from work or school.

In my observations as a prosecutor and defense attorney in traffic court, I have never seen a truly effective pro se motorist defend themselves. It just doesn’t work – too many pitfalls and procedural traps to overcome yourself (like motorist’s “admissions” just for starters, procedural law and objections, etc.)

What is the NYS Traffic Ticket Point System and how does it work?

The traffic ticket point system gives the New York State DMV a way to identify and take action against high risk motorists. NYS DMV assigns points for certain traffic violations. If you get 11 points in an 18-month period, your driver license may be suspended. However, the point system is not the only way to lose your license in New York and elsewhere as a consequence of trouble here.

How points are calculated?

A driver must be “convicted” first of the traffic violation before points are added to a driving abstract or DMV record. NOTE: the points total are calculated from the date of the violation, NOT the date of the conviction. That DMV safeguard is what keeps all the traffic ticket court houses from too much backlog from motorists adjourning their cases. The conviction date is not what controls – it’s the date the traffic ticket was ISSUED. The points for infractions which occurred within the last 18 months are added to calculate the driver’s point total. This is a continuing scale which always keeps the time between the receiving of tickets most relevant to calculating the potential suspension or revocation of licenses.

Out-of-state convictions do not usually effect New Licensed motorists. If you are convicted of a traffic violation in another state or country, points are not added to your New York State driving record, unless the violation occurred in Ontario or Quebec. Traffic ticket convictions occurring in these provinces are recorded on your New York State driver record, and the convictions have the same effect and carry the same points as convictions occurring in New York. This can affect your driver violation point total and Driver Responsibility Assessment (i.e., more potential financial consequences for the driver.)

Out-of -State drivers also get points if convicted of a violation within New York State.
When a driver visiting NYS is convicted of a traffic ticket carrying points (which virtually all moving violations do), DMV searches for an existing NYS driving record and adds the conviction to it. If none exists, NYS DMV creates a new record for the driver to reflect their abstract of conviction. The new DMV record will denote “NO NY LICENSE.”

Out-of -State drivers privilege to drive in New York State may get suspended if convicted of a violation within New York State. In the event a driver visiting NY fails to answer a traffic ticket in NYS, the court may direct DMV to suspend the out-of-state motorists driving privilege here (which often leads to a driving while suspended arrest.) NYS DMV will also notify the driver’s home State of the suspension which, in turn, may lead to a suspension in their own State as well.

Let our firm go to court on your behalf and fight your ticket with our experience, professionalism and dedication – you will not be disappointed.