Failing To Stop At Sign And Various Lane Violations 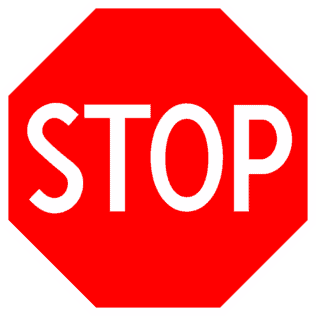 § 1172. Stop signs and yield signs. (a) Except when directed to proceed by a police officer, every driver of a vehicle approaching a stop sign shall stop at a clearly marked stop line, but if none, then shall stop before entering the crosswalk on the near side of the intersection, or in the event there is no crosswalk, at the point nearest the intersecting roadway where the driver has a view of the approaching traffic on the intersecting roadway before entering the intersection and the right to proceed shall be subject to the provisions of section eleven hundred forty-two.

Running a STOP sign and most other so-called lane violations carry three (3) points in NYS if convicted by pleading guilty as charged or going to trial and losing. Frequently, police issue a motorist more than one such traffic violation when pulling them over. SO TICKET POINTS ADD UP!

Thus, to be found guilty of this offense, the burden of proof is upon the prosecution to establish beyond a reasonable doubt all the following conditions (legal elements):

Similarly, a driver approaching a yield sign shall stop behind the painted line, if required for safety. If no line is present, they must follow the same rules set forth for stop signs in determining where he must stop.

Examples of Some Common Defenses:

The vehicle stopped further back from the intersection.
The statute indicates the vehicle must stop at the limit line on the pavement, crosswalk, or entrance to the intersection. Essentially, this means stopping slightly before reaching the line. Some operators, however, stop their vehicles farther back from the white marker line or crosswalk. In those circumstances, a police officer hiding behind some brush down a side street may not be able to clearly see whether the driver actually stopped or not.

The motorist’s view of the stop sign was obscured.

This can occur if the stop sign is shielded by branches or obscured for any number of possibilities (take a picture at the time or shortly thereafter). That is, given the information the motorist possessed, they made a reasonable mistake and not guilty as alleged. But, the burden of proof will shift to the defense to prove their mistake was truly and objectively, “reasonable.”

Painted line on road was faded.

Crosswalks and painted lines do eventually fade unless well maintained by the municipality. Tickets for stopping a little too far into an intersection, may be able to successfully show that the line or crosswalk was too faded to see clearly. Tip: a picture is better than a thousand words (especially coming from the accused motorist!)

It is undoubtedly easy to miss a new sign on a familiar road and the courts are often willing to give a bit of latitude with a grace period. But this defense is available only where a sign was really just installed and that the motorist used the road frequently before the sign was recently put there.

Of course, ignorance is no excuse.

It is not a mistake of fact to say a motorist did not know it was unlawful to do something otherwise illegal (such as, rolling stop through a stop sign instead of “complete stop.”) Every motorist, even from out of state, were taught, or deemed to know, the rules before getting licensed. A mistake defense may work only if you reasonably lacked a piece of factual and important information when alleged to have broken a traffic law, for example, green light entering intersection, turns red but motorist’s view obscured by large truck in front of car. More likely, this limited kind of honest, but mistaken, scenario creates some wiggle room for effective negotiations with the prosecution.