What is a Refusal Hearing

“Whether ‘tis nobler in the mind” to take the breath test or not to take it – for our purposes that is the question. If you are pulled over on suspicion of drunk driving in New York and you know you’ve been drinking, even knowledgeable New York DWI attorneys are often divided on whether or not to refuse to perform the breath test because there are so many other factors besides intoxication that could affect the results.

So, the answer really does “depend”. For example, if someone truly did not drink a lot, they may as well take the test to help further later plea negotiations. However, if they did drink a relatively considerable amount or they have a prior, they should consider refusing to perform any tests. Ideally, that means refusing to participate even in the roadside standardized field sobriety tests (SFSTs) at the scene AND the chemical breath test requested later at police headquarters or the troopers’ barracks.

Generally speaking, breath alcohol tests work by measuring the concentration of alcohol in your breath; i.e, blood alcohol content or concentration (B.A.C.). With each breath taken, tiny blood vessels in your lungs called alveoli take in oxygen while discharging carbon dioxide – and, indicia you’ve been drinking alcohol. The breath test machines measure the concentration of alcohol in your breath and applies a standardized equation to estimate how much alcohol there then is in your blood.

Be advised – there are consequences of refusing the chemical breath test. Ultimately, whether it is the correct or incorrect decision, if you refuse to submit to a chemical breath test, such as to the breathalyzer or intoxilyzer, your license or privilege (if not licensed here) to drive in New York State will automatically be revoked for one year. It is somewhat recent policy of the Westchester County District Attorney’s Office to decline to make an offer of a reduction even on a first offense when the motorist refuses the test. So, the answer no longer is to simply “refuse” as knee-jerk reaction.

But, as with every forfeiture in our judicial system there is a corresponding due process hearing – here, it is one simply known as the “refusal hearing.” 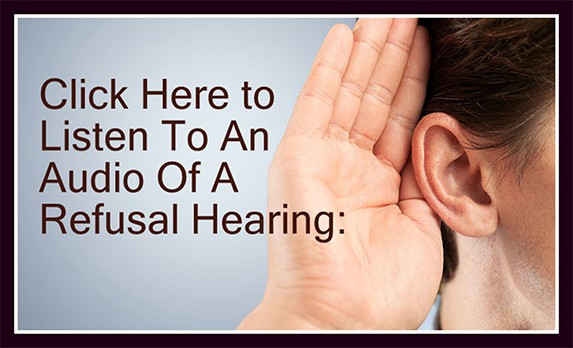 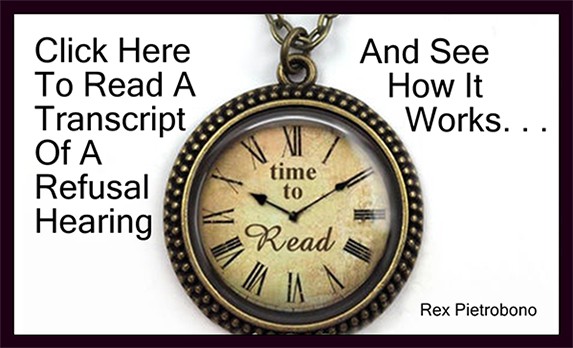 It is an entirely separate proceeding from your criminal case held within fifteen days of the arraignment. An Administrative Law Judge or “ALJ” (appointed by DMV) oversees the case where the standard is “clear and convincing evidence” (more than a “preponderance of evidence” and less than “beyond a reasonable doubt”). At this hearing, the ALJ will make a ready determination as to whether or not you knowingly refused to take the chemical breath test.

Although distinct from your criminal case, a DWI Refusal Hearing can be a significant part of the overall DWI case. Not only can you lose your license for a year, be fined $500 and assessed $750 by the DMV, but prosecutors can use your breath test refusal at your criminal court DWI trial. In fact, the law permits the assistant district attorney (ADA) to use your refusal as “consciousness of guilt” and to draw an adverse inference against you. Thusly, potentially giving prosecutors additional weaponry in their already potent arsenal is not a casual decision and the advice of a lawyer experienced in driving while intoxicated cases and law should be obtained.

Going to a Refusal Hearing alone would be unwise.  Although ALJs may make their decisions merely on the procedural papers provided by the police, if the officer shows up there is an unique opportunity to cross examine them. More importantly, not only will a record be made of the testimony, (for example, see one of Rex Pietrobono’s hearing transcripts above) but no prosecutor will present to make objections or act on behalf of the police officer (although the ALJs seemingly battle quite hard to do just that). An experienced DWI defense attorney will be able to lock a police officer into helpful testimony that is potentially damaging to the prosecution’s criminal case at a later date.

Despite the fact that a Refusal Hearing is ripe for this opportunity for a pre-trial cross examination of the law enforcement officer, the end result, i.e. the potential revocation of your license is very real and often difficult to avoid because the standard of proof at the DMV hearing is lesser than the criminal law proof of “beyond a reasonable doubt” (this fact is borne out from ALJ exceedingly high records of affirmative findings and revocations).

What Proof is Required by Law Enforcement at a Refusal Hearing?

The four primary issues for the defense to watch for at a DMV refusal hearing:

After the refusal hearing is completed, if the ALJ “finds on any one of said issues in the negative, the hearing officer shall immediately terminate any suspension arising from such refusal”.

On the other hand, if after the Refusal Hearing, the ALJ “finds all of the issues in the affirmative, such officer shall immediately revoke the license or permit to drive or any non-resident operating privilege”.

While the odds of success are much more difficult at this DMV hearing than in a criminal court, the information potentially gained, even if you do not keep your license, is too significant to merely disregard considering the larger picture.