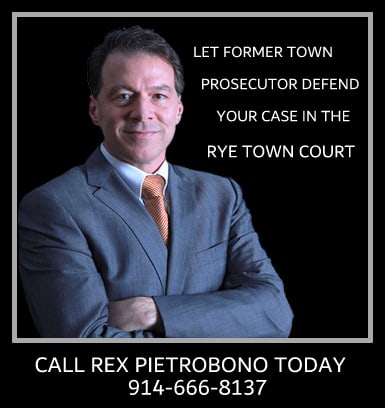 Rye Town Justice Court is located within the Village of Port Chester (shares the Port Chester courthouse at 350 North Main Street in Port Chester until a replacement courthouse is constructed from its former location) and it has jurisdiction in Port Chester, Rye Brook and the Rye Neck section of Mamaroneck. The Rye Court has two elected justices. Each judge sits on the bench one day per week to cover criminal and civil matters and one night per month to hear vehicle and traffic or small claim cases. Judges are on call 24 hours per day to arraign any person who has been arrested.

Rye Town Court has preliminary jurisdiction over all criminal and traffic related cases arising out of incidents occurring in the town. Such cases are on the Court’s Wednesday morning calendar. The Justice Court has trial jurisdiction over all cases if the jail term that can be imposed does not exceed one year. The office of the Westchester County District Attorney prosecutes criminal cases.

Cases charging the commission of a traffic infraction are filed in the Rye Town Court if the alleged offense took place in the town’s jurisdiction. A plea of “not guilty” is required to either be timely filed with the court either by the motorist or their attorney if they so elect. There are basically two choices: a plea of “not guilty” which allows a defense to be presented in the case, versus, a plea of “guilty” which locks in a conviction of the offense “as charged” which closes the door on a negotiated resolution or trial.